May the Fourth be with you. Always.

I’m not exactly sure when it happened, but today has come to be celebrated amongst nerdlingers everywhere as Star Wars Day. May. Fourth. May. Force. Get it? Yes? Good. According to the infallible Wiki, this happened:

When Margaret Thatcher was elected Britain's first female prime minister, it happened on the Fourth of May 1979. This led her party to place an advertisement in The London Evening News, which said: "May The Fourth Be With You, Maggie. Congratulations.”

Now, I believe the church of Jedi-ism was actually started in England, so this seems entirely plausible to me. And if given a choice between serving a dour old queen and a bad-ass, lightsaber wielding Jedi, who already knows that you're a weak-minded fool, I think you all know which side I’m leaning. (Please say I get to have my own lightsaber! Say it!)

So, as a male born in 1970, Star Wars is one of those events that surrounds us, penetrates us and binds the galaxy together, and has clearly had an impact on my life. (Here’s a whole host of other 1970s-type things.) I don’t remember a lot of things. And I mean A LOT. Where I left my keys, what we had for dinner, Dana's cell phone number. All vapor. But I *can* remember going to see Star Wars (and we didn’t call it Episode IV back then and we sure as hell didn’t call it “A New Hope" either. It was just "Star Wars." And when I say "Star Wars" I'm referring to the first movie. Individually they are Empire, Jedi, Phantom, Clones and Episode III. There. Now we're all squared-away on semantics.) at a small theater in Carmel, California. I can remember walking down the steps to go into the theater. I can remember watching it with my cousin while my parents shopped. (It was 1977, what adult wouldn’t leave two 7 years-olds alone in a theater to watch a PG movie while they go out shopping on vacation?) I can *clearly* remember the Imperial Star Destroyer flying overhead at the beginning of the movie and knowing that I was about to experience something the likes of which I’d never seen before. (Only T2 and The Matrix have managed to deliver a similar "I don't know what's about to happen, but, man! I know it's gonna be the awesome!" since.) When the movie ended, we walked out into the lobby to meet my parents, told them how amazing it was, and then turned back around to go in and watch it again.

Since Jedi, I’ve seen every Star Wars film – including all of the re-releases – on opening day. (I can remember throwing a crying fit in 1980 – yes, I was 10 and no, I don’t think I was too old to go off on a crying jag – when I found out that Empire was releasing and that I’d have to wait a whole extra day to see it. Some tragedies can only be expressed in tears.) And I'm not going to say that visiting Lucas Ranch and ILM are the highest points in my life, but, well, yeah. Pretty awesome. (Here's a link to some photos from my visits. Oh yeah, That's right visitS. Plural. When someone from LucasFilm, or ILM or THX or whatever calls with some backdoor way into getting you a Ranch visit, you just say "Yes!" The whens and hows and whys will all work themselves out. Trust me. You ARE going to want to go. And if you don't trust me, ask my friend Dan. He's accompanied me on two visits. Every journalist has to have someone toting the camera bag.)

So, yeah. Star Wars. Swelliing John Williams' score, awesome special effects, bizarre alien creatures, strange new worlds, cheesey dialogue the whole deal. So the other day, I got this in my e-mail in-box from [email protected] (If you’d like to share any jokes relating to probes or droids or droids that probe, the comment box is open below. Writing in haiku, limerick or sonnets in iambic pentameter will be given highest marks for class!) 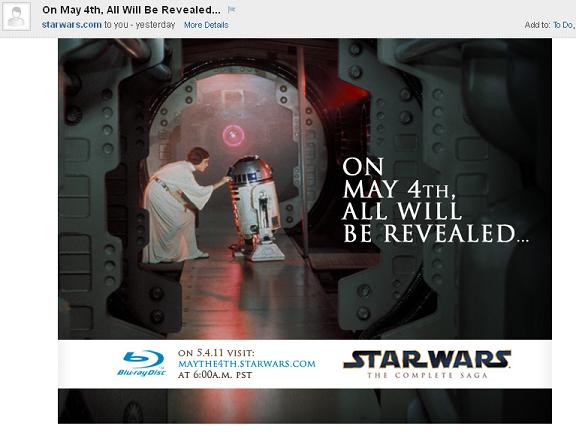 Of course, my curiosity was peaked. What would be revealed? Those mythical Star Wars episode VII, VIII and IX books that people claim to have seen in bookstores back in the early 80s? The fact that Bobba really DIDN’T make that totally wuss scream as he fell into the Sarlacc Pit? (Seriously, probably my WORST thing about the entire Star Wars canon. Even worse than Jar-Jar. With him, you knew you were just getting some merchandising buffoon-ery. But Bobba was special. Bobba was sacred. Bobba was frickin' BOBBA! George, you hurt me with that. Injured. Injured bad.)  That George was throwing a Golden Ticket event for secret-secret tours through Lucas Ranch with some oh-so-special and not-so-young-anymore boy being handled the keys the the LucasFilm empire at the end of the day when he admits to drinking the Fizzy Lifting drink and handing back his Force Gobstopper?! (I’m that boy by the way. And I’m going to continue running the Empire with a crushing, Vader-like fist! We'll just see how many star systems slip through my grasp! Oh, yes! We'll just see!)

No. Turns out the full details of the Complete Saga Blu-ray release are being announced. Basically all the finery that was omitted during the pomp at this year's CES -- that I DIDN'T attend, I'll bitterly remind you! -- press event where we were informed that 2011 would be the year that Episodes I - VI make their inaugural appearance on Blu-ray.

And before you start your clamoring yes, yes, I already know. Of course, we’ve all sworn it before. And it goes something like this, “I swear! This is THE LAST TIME that I’m buying Star Wars! This is it!” I said it on VHS. I said it again on VHS Letterboxed Edition. I said it on LaserDisc Special Edition Box Set. And I said it on DVD. Now, dammit, I’m gonna be buying all six movies all over again on Blu-ray. Why? Because it's gonna look and sound better. And because that's exactly what George wants you to do. (I told you we were all weak-minded fools.) And before you get on your, “Well! Just se if you get me to be it again after this, George!” high-horse, just let me tell you that we already know he’s re-re-releasing the movies again. In 3D. So, go ahead and enjoy this box set while you can, but save some room on the shelf for later. Self-loathing is allowed.

Visit May the 4th.StarWars.com to get your wallet amped for the big purchase you'll be making this September. And here's a couple of YouTube videos to further raise your Star Wars Blu-lust to fever pitch. Or something. Just watch the clips. These are the videos you're looking for...

Reply Keely
4:11 PM on May 4, 2011
Holden has been saying "May the 4th be with you" for weeks now. He checked that website first thing this morning, before school. And yes - he is psyched about every single release, re-release, re-re-release. Cause why? Cause he can't wait to hear George Lucas' commentary! Yeah...he will watch George Lucas talk...for hours...He's been doing it since he was 3 yrs old.

Keely says...
Yeah...he will watch George Lucas talk...for hours...He's been doing it since he was 3 yrs old.


First off, this sounds like TOTALLY normal behavior. In fact, I'd be concerned if he DIDN'T want to listen to George. Second, there is something that is just reassuring about a bearded man wearing flannel. Tell Miah to (finally) sack-up and buy a Blu-ray player so he doesn't disappoint his only son...

Reply Dennis Burger
11:24 PM on May 4, 2011
One of my fondest memories in the world involves Star Wars, and the only time I can ever remember my mom being dishonest. I was five. I had the flu. My uncle had been talking about this Star Wars thing for weeks (he heard about it at ComicCon, I think -- or whatever the ComicCon equivalent was at the time). But the day it opened, I started running a fever, so my mom decided it would be best if we didn't go to the movies. And then our air conditioner died at home. And June in Alabama is toasty hot, even in 1977. So she took me to see Star Wars, and we sat through the movie twice (but only paid once).

I think it was two years later when she took me back to see it again, and they had changed the crawl to Episode IV: A New Hope. I freaked out! I thought we had missed the second two somehow! But my mom patted me on the head and said, "No, I remember this music. It's the same music. You don't think they would use the same music for two different movies, do you?"

My mom and I saw every Star Wars movie after that on opening day together. Every single one. Up 'til Episode II, that is. She was having major surgery that day, and they said she wouldn't be out of ICU for three weeks, at least. A week and a half later, she and I were sitting in the theater, seeing Attack of the Clones together.

Sadly, she was so sick by the time Revenge of the Sith came out that she couldn't go to the theater, and by the time it came out on DVD, she was so drugged up and ravaged from chemo that she couldn't even sit through a movie at home. But her eyes lit up when I told her that "Artie Dootie" flew. And she said, "Oh, thank goodness" when I assured her that Obi-Wan had gotten a haircut in the intervening years.

Dennis Burger says...
One of my fondest memories in the world involves Star Wars, and the only time I can ever remember my mom being dishonest. I was five.


Dennis:
Thanks for sharing your Star Wars story. Very heartfelt. I hope that it brought back some good memories for you. I also hope that George doesn't read this and come knocking on your door demanding payment for that extra showing....with interest!

I can remember when I saw Empire and when the crawl came up and said Episode V, I thought, "Wait?! What?! Where were the other ones?! What did I miss?!" I wonder when exactly George slipped that little addition in. I guess that would be the first ever Star Wars revision...

Dennis Burger says...
I disctinctly remember seeing "Episode IV -- A New Hope" in the '79 re-release, so I'm guessing it was then.


I think I remember that re-release....we want and saw a Star Wars / Close Encounters of the Third Kind double-feature. Greatest day EVER!

Also, on the re-release I saw Ep 4 at the Grauman's Chinese Theatre in Hollywood. I distinctly remember thinking that you should not eat the ENTIRE box of Red Vines by yourself... and that I went around saying "Red 5 standing by!" for several days...