The One Wire dream...finally here?

One of the constant questions that we face as custom installers – beyond, of course, the “can’t I just do something wireless?” and “what do you mean ‘it’s my cable box’?” and “you’re gonna charge me for that?” and “will you match the price I found at notauthorized.com and still give me your great service?” – is “Do I really need all of that wire?”

In the past, the back panel of a system or a rack would be PACKED with cabling. Big rainbow colored loops of wire spooling out in all directions dressed down in trunk lines thick enough to moor an aircraft carrier. Audio signals, video signals, control cabling, speaker wiring, power cabling. We reveled in the manliness of our trunk lines, however, proud with the awesomeness which was all of that plastic sheathed copper. Check the back of my rack. Are ye not humbled by the quantity of my cabling and the cut of my jib?! 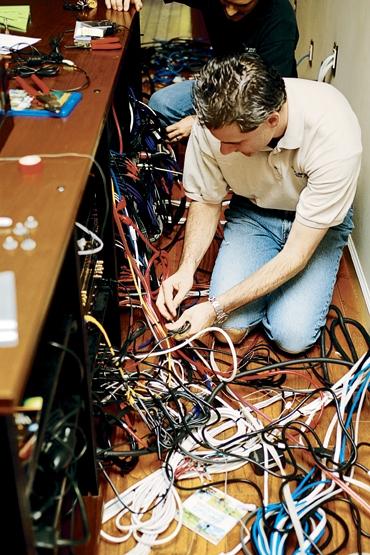 But homeowners saw all of that rainbow colored, hopefully nicely routed and labeled, cabling and didn’t see beauty. They didn’t see potential dripping with awesome barely harnessed by a zip-tie. Oh, no! Many of them took it as something shameful and as some kind of personal affront to their dignity and sense of social graces. As if a neighbor or random passerby was catching an unwanted glimpse at a petticoat. And they would inevitably hit you with the, “Oh, my lands! Must I really have all of that cabling? It seems SO excessive. I just wanted a little bit of music by which to churn my butter and flog my clothing against my wash-rock. I best go lie down upon my fainting couch."

And I would often respond, “Well, why don’t you just tell me which cable you don’t want to have and I'll be glad to rip it out and tell you which part of your system you’ll be giving up. This one? Well, that was your video feed. You do like to watch, right? That one? Well, now you just lost audio. This little blue one? Yeah, that's the Internets. Say bu-bye to streaming Netflix. Oh, and you don’t even want to THINK about pointing at that one, no siree!”

But HDMI has greatly streamlined that. Now with a single, mostly-doesn’t-fall-out-and-cause-a-service-call-issue...mostly cable, you can replace up to eleven other cables! Yes, man, I said ELEVEN! (That would be the three from component video and the 8 from multi-channel analog audio if you’re keeping the box score at home.) This is a picture of what I ripped out of one system and replaced with six, oh-so-easy-to-bundle-and-manage HDMI cables. 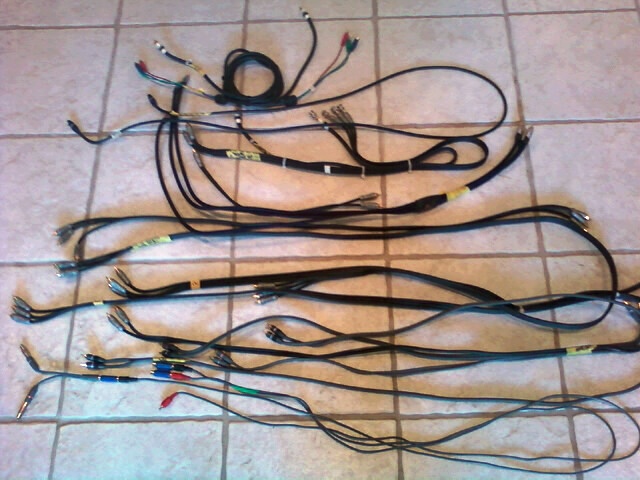 That is a *serious* amount of cabling reduction. Leaving you with a thick pile of metal-headed, fits so good in your hand don't understood why I have this sudden barbaric desire to gather it up and swing it violently round-and-round my head as I charge after someone Maximus-style shouting, “At my signal...UNLEASH HELL!”

So, now we can greatly streamline all of that mess behind people’s racks; simultaneously making their systems not only look and perform better but also appeal to the evolved pre-disposition towards irrational cable hatred AND make it easier for us to rack-in and service later on. Fantastic, right? End of blog, right? Nothing more to say here, right?

Not so fast, cable-sabe! You would try and take the easy way out, wouldn’t you? You’d just be totally content to slink away, overlooking the two other cables gumming up the works. Just blissfully sweeping the Ethernet and power cabling under the carpet when no one was looking. That is not the way to get the Sciacca name to stand for quality. No, sir!

Plus, we’re not even addressing the fact that even if HDMI were the second coming of all that is good and cabley, and it could carry these things, it still has a bit of a range issue. If you’re an installer and you pull HDMI cabling longer than 10 meters, you are brave; longer than 15 meters and you’re gonzo-daring; longer than 20 and you must just like to look at your customer’s sad-turning-to-bewildered-turning-to-angry faces and explain why their screen is filled with sparklies and occasionally goes all blue/black screen of death on them.

Now, sure, you could eliminate the Ethernet cable and go with WiFi but for some applications the speed and QoS just  isn’t up to the task. Ever tried streaming REAL HD via wireless? I…ca…be…ki…f…st…ery. Wait, let me just plug the cable in; OK, here we go. It can be kind of stuttery. Other times the WiFi signal might just be too spotty and unreliable in that location.

And then there’s power. I mean, no one wants to mess with high voltage, right? That stuff can kill you! Seriously, there's a good reason why you never hear about speaker installers accidentally touching positive and negative together and then looking at the smoking black char hole where a foot used to be. (OK...there were those rumors about being able to arc-weld with some of those old Bryston power amps...) Plus Romex wire is all stiff and pokey to work with.

But with the advent of a new(ish) technology, we have just taken one giant lean in the direction of being down to a TRULY single cable solution.

I hear you all out there. “John, what is this HDBaseT technology? And are you actually going to charge me for this?”

Answer number two: Sadly, no. This site continues to remain free and fully supported by a 100% volunteer effort. Donations welcomed and gladly accepted.

HDBaseT technology is optimized for whole-home distribution and can connect all the entertainment devices in the home through its 5Play™ feature set, converging uncompressed full HD digital video, audio, 100BaseT Ethernet, power over cable and various control signals all through a single 100m/328ft CAT5e/6 cable.

The compelling features of HDBaseT technology include:

Uncompressed video/audio up to 10.2 Gbps. HDBaseT technology is capable of scaling up to 20 Gbps of throughput while enabling multi-stream support

Maximum cable length of up to 100m, including support of multiple hops, up to 8 x 100m

I hear you out there, breathing through your open mouths – and, grab a mint, will ya? – and struggling to form a complete thought worthy of summarizing the enormity of it all. “Huh? Wha? Power? On a low cost standard Cat5e/6 LAN cable and standard RJ-45 connector?” (You were clearly paying VERY good attention to the middle part. Bravo.)

Yes. I speak true. According to the HDBaseT folks and their frequently asking-ness, “Yes. You can power an HDBaseT enabled 40″ LED TV with 70 watts, and in the near future the TV size you can power with HDBaseT will dramatically increase. HDBaseT can power remote TVs and other devices up to 100 watts, a capability no other transport technology can provide. A 40” TV connected via an HDBaseT enabled Cat5e/6 cable requires no power source. This is ideal for wall-mounted flat panel TVs prevalent in the consumer living room today.”

Here is a link to a recent Ethernet powered TV demo. (Whether it was using the HDBaseT special voodoo sauce or not isn’t mentioned. Let’s just assume that it is, shall we?)

Pow!  One cable. One CHEAP cable for that matter. One you-probably-already-have-hundreds-of-feet-of-it-in-your-walls Cat5 cable. For all of your audio, your video, your Internets AND your powers. One Cable to replace them all, One Cable to mind them. One Cable to link them all, and in true HD to bind them.

Look for an upcoming review of an HDBaseT HDMI extender coming to an issue of Resi Systems (hopefully) near you! In the mean time, feel free to dunk your heads deep in the cool, refreshing single-cabled HDBaseT waters and drink deeply from their fount of knowledge by clicking this link to their .org.

Reply Scott Robertson
3:07 PM on July 6, 2011
Have you ever been told by family members to drop the sarcasm? Yes? I thought so. Please continue to ignore them. Thank you for the fun and poignant summation on the worst part of networking and AV. I had hoped that HDMI would be the panacea but that only goes so far. Is HDBaseT just marketing spin for something that we would have called a "media" adapter or extender last week? Or are we going to see Cisco take over AV networking with ubber POE, specialized HD DSPs, and AV biased switches and routers? M$ HMS doesn't know how to work at layer 1 or 2, but will that even matter in the Office/Home of the Future since Cisco tends to fail at anything that goes beyond a command line for programming. And the biggest question will always be how can I hook up the legacy gear that I've been investing in over the past handful of years? Never a dull industry.....

Reply Jeffrey Reiss
10:27 AM on July 7, 2011
I witnessed a few manufacturers at Infocomm showing products with this standard, although they did not include the power feature implementation. Something about 100 watts ?scares them?. When asked at a few booths their response was they are waiting for the standard to be ratified. I saw the same thing with POE switches when they came out, but they were much lower POE then this standard. Are the lawyers of these manufacturer telling them ?no? to putting this much power on a cat5? The solutions I saw were minus the power. Thoughts on this. PS I think this is a great solution.

Jeffrey Reiss says...
I witnessed a few manufacturers at Infocomm showing products with this standard, although they did not include the power feature implementation. Something about 100 watts ?scares them?. When asked at a few booths their response was they are waiting for the standard to be ratified. I saw the same thing with POE switches when they came out, but they were much lower POE then this standard. Are the lawyers of these manufacturer telling them ?no? to putting this much power on a cat5? The solutions I saw were minus the power. Thoughts on this. PS I think this is a great solution.


I think like any new technology, there will be a bit of time to ramp up and also some hesitancy to be the first. Once someone major -- like a Sony....remember when they went silver and then ALL TVs were silver? -- adopts it, it will be everywhere. Plus, as sets continue to get more energy efficient the power requirements will continue to drop. Even with a receiver running some digital amplifiers, it isn't far fetched to imagine having a TV, A/V receiver all connected by two Cat5 cables. Then maybe jump ahead to some HDBaseT enabled speakers and you can just take the receiver out of the equation....

Scott Robertson says...
And the biggest question will always be how can I hook up the legacy gear that I've been investing in over the past handful of years? Never a dull industry.....