Putting their money where their mouth is

A few of weeks ago I posted a bloggie speculating who should pay when a manufacturer’s product messes up. Then – because it’s how I do – I posted a second and (quite) lengthy follow-up rant. Essentially, when things break in the custom world, it is usually the installer that ends up holding the bag. Usually a big bag of flaming, reeking pooh that not only smells but costs money. And, as we all know, when the music stops, no one wants to be left holding the pooh bag. Especially when it is flaming.

I started a discussion and posted a link to the post on the CE Pro Linked In member’s group (membership requirements for joining are clearly fairly low as they welcomed me amongst them; use that as the litmus as to whether you’d like to consider joining or not) and many other installers weighed in; in fact 37 comments have been posted to date. (Also making me the Top Influencer at CE Pro for the week, much to the dismay at consternation of Julie Jacobson, I’m sure.) Most of these comments were from other installers sharing similar, “Dude! I got burned too! I’ll never use Brand G again! And neither should you! In fact, we should form a coalition to overthrow these cheap, Chinese gear importing bastards!”A group was formed, a quorum was assembled, votes were taken. It was all very official.

But beyond the often fully justified ravings, I actually heard from a few manufacturers. Manufacturers that agreed, “Yow! That’s not fair, givin’ a guy a shot down there!  (IN-TER-JEC-TIONS! (Hey!) show excitement (Yow!) or emotion (Ouch!))” And that in this case these emotions should definitely be set apart from the sentence with an exclamation point, because the feeling IS that strong. (Seriously, I loved Schoolhouse Rocks! I mean, really.)

Rich Maez, Sales and Marketing Director, Boulder Amplifier wrote, “[Hardware doesn’t] die because of software changes unless the software changes the fundamental way some hardware works.  But really, if the software upgrade was recommended by the manufacturer, then it shouldn't have been your issue to pay for anyway - it should have been the responsibility of the manufacturer to make this a warranty call for the repair dude.  It's sort of like us building a preamp or something, recommending that the user upgrade to the newest version of software or firmware and the preamp blows up.  Well, we told you to do it, you did it based on our recommendation, it died, we'll take care of it AND figure out why it did so in order to improve our future reliability so that this isn't a common occurrence causing our dealer partners to become skittish about selling our products.  Or sumthin'. Best regards.”

That’s pretty good. I mean, that’s a real “stand by your man” kind of sentiment. Except the “man” is an amp. But, Boulder makes products that are, shall we say, fairly frickin’ expensive and machined out of solid billets of Unobtamium and metalized awesome, so they SHOULD stand behind them. (Actually, they should probably stand safely off to the side, where any residual Pure Class A bad-assery would be less prone to kill someone.) Plus he gave me his BEST regards, not just regular regards. So, I’ve got that going for me, which is nice.

With many of the installer complaints being about the poor quality of HDMI balun components – at one CEDIA, Head Monster, Noel Lee, proclaimed that ALL HDMI cables were made in China. ALL of them. I imagine that is still true; just a little factoid for you to squirrel away for that next big Jeopardy match-up against Watson -- Michael Lakhter, VP of Sales at Key Digital shed a little more light on the subject.

“Cheap Chinese OEM's do not have R&D departments in the States and they are not connected to the market place. Some US manufacturers go to China, buy the products and just add their logo on the products. This is a HUGE mistake, as they are totally dependent on the Chinese engineer who is basically out of touch with the market but more importantly who is told that his designs must use the cheapest product parts and cheapest designs. This strategy worked great, when dealing with analog products however, in the HDMI world this is a suicide.”

From what I could infer – and, look, I’ll be the first to admit that I’m no engineer and inferring is not my strong suit. I seriously don’t even like messing around with a soldering iron! Getting my face and hands mere inches away from a 500 degree piece of metal? Uh, yeah. No. – this isn’t always even the manufacturer’s “fault.” Follow this hypothetical: You decide for some insane reason that you want want to get into the HDMI making business and compete against all those other people selling $.49/1-meter cables on Ebay. So you head on over to the Huang Chang Factory and get your HDMI order ALL worked out. You specify the proper materials and packaging -- printing "Works with 3D!!!!" in as many different font types as possible on every square inch of the label -- and product testing and all that and then place your order. Say for a million of them. You grab some delicious Kung Pao Chicken, pick up a few fake iPhones and counterfeit Blu-rays and then you jump on the Beijing Express back to the States and wait for all those sweet, sweet HDMIs to start rolling in. Except, back in China, Wei Long, the plant manager, decides that if he shaves a micron of materials off some component on your – and the dozen other identical projects he’s working on – order, no one will notice and he’ll save a couple of Yuan per 1000. That's some swee Yuan he can use to buy his fiancee a new pee bucket for her work station, and that is a very esteemed gift amongst the working class. The manufacturer receives the shipment, random-sample-tests a few and then ships them out. Great day to be in business! Except, that missing micron causes the component to wear out over time. And then fail after like 6 months. Then who has to deal with the fall out? The guy that installed it. Sucky day for that guy to be in business.

A while ago, Niles had a problem when a major chipset component in one of their new products was discovered to be counterfeit. I know Sparky Detmer, and I can assure you that Niles didn’t spec in a counterfeit part. (Spec in some fresh Wasabi? Yes. That would be classic Detmer.) Their manufacturing partner in China might not have even known it was counterfeit. Somewhere in the chain, someone decided to cut a corner and substitute a fake for the real thing. Frickin' pee bucket economics all over again. Then the Niles box arrives stateside and…brokey-broke. Causing Niles to do the right thing...completely stop production, test every unit in house, and issue a recall of all affected serial numbers.

But Michael Lakhter – remember, the guy from Key Digital I was talking about like 3 big paragraphs ago; before we got into the HDMI manufacturing biz and had our whirlwind tour of China? OK? – totally stepped up.

“Key Digital has 10 engineers in US/New York working on hardware and software. Yes, our products are more expensive because we have 10 engineers on staff and we do not design based on "cheapest" product parts. Typically we are more expensive by 20% but the results are guaranteed and we stand behind out products. If anyone wants to try key digital hdmi baluns (kd-cathd) free of charge email me. I will authorize one pair per dealer, up to 5 freebies for this test run.”

I actually have two projects going right now where I need HDMI over Cat5 baluns. (And, no, they aren't "John's house" and "John's other house." These are actual paying customer projects. And, sadly, I don't even have a other house.) Serendipity some might say. Or you could say it’s finally things turning up Sciacca for a change. Whatever. I e-mailed Michael and a couple of days later this love package arrived: 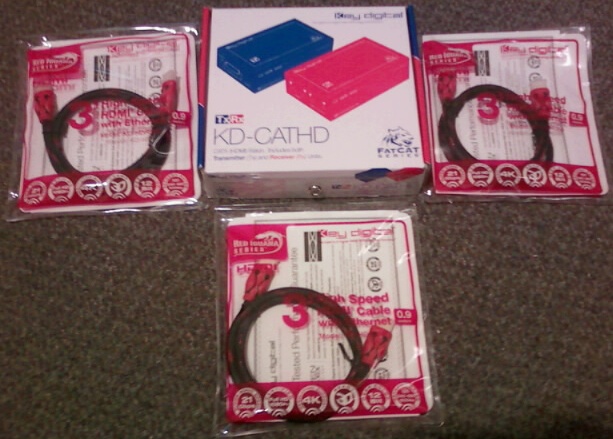 That’s balls. Well, maybe it’s not balls, but it’s *something*. Think I won’t look to Key Digital to buy HDMI baluns in the future? Think a 20% premium to guarantee that it will work is worth it? (I know it’s hard to read tone and inflection here, so I’ll say, “Yes. It is worth it. Totally.")

Then I talked to the CEO of SnapAV. Now, I’ll be honest; I have yet to actually purchase anything from Snap. Not for any reason other than I just haven’t needed to yet. Anyhow, we talked about some of the manufacturing challenges vis-à-vis HDMI and baluns and whatnot and he told me the lengths that Snap goes to to insure that their products don’t snap under pressure. Or maybe it’s that they DO Snap, like into action. Whatever. The point is, they try to make sure that their shizzle doesn’t brizzle. They do this by being selective over their manufacturing partners and making sure that Snap’s business is important – ie: worth a lot of money – to the manufacturer. Basically you screw us, we’re gonna screw you right back.

Snap CEO also said that many of Snap’s products are backed by a double your money back guarantee. 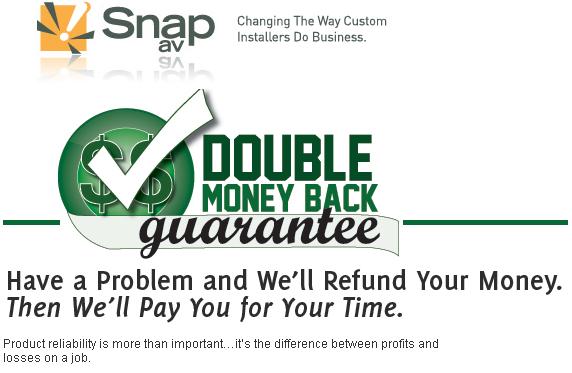 What is this madness you ask? Here’s the Snap fine print:

"All SnapAV dealers with accounts in good standing are eligible to participate in program. Dealer must call SnapAV from installation site and allow SnapAV Technical Support team to troubleshoot product installation. SnapAV reserves the right to disqualify any claim that is the result of HDMI extenders, HDMI cables or Category wire from another manufacturer (in other words, we can’t guarantee someone else’s products). All ‘Double Money Back’ claims must be made within 60 days of invoice for SnapAV product in question. Dealer must facilitate return of defective product to SnapAV to qualify for double refund (of course, SnapAV will arrange for a pick-up of the product and pay for the return shipping). Double refund will be processed as a credit toward future SnapAV product purchases when defective product is received by SnapAV. That’s it. Really."

Of course, it’s the sweetest plum when things NEVER break, but, well, that’s just not the way it always works out in this imperfect world. But, the next best thing is knowing that there are manufacturers out there that are willing to step up and stand behind you when something breaks in the trenches. Feel free to leave any outstanding – good OR bad – customer service examples in the comments box.